Mount Auburn Cemetery represents a significant shift in American thought on death, urban sanitation, and landscape aesthetics caused by religious movements that rejected Calvinism, the rise of the transcendentalist movement in Boston, and the political and moral values of the Jacksonian period. While the cemetery’s elite founders intended for Mount Auburn to be a cultural institution for the instruction of morality, its popularity as a recreational space also contributed to its success and subsequent emulation in the rural cemetery movement, and its influence on the urban parks movement and early romantic suburbs.

As a result of ideological changes, Americans began to place greater emphasis on individual worth. Increasingly, Americans felt like they had a right to visibility and security in death due to Jacksonian democracy. Additionally, as people rejected the notion of predestination, they saw the corpse as containing parts of the deceased, resulting in the sentimentalized secularization of death. This caused urban Americans to become uncomfortable with burial practices. Most urban cemeteries were crowded, had mass graves, and did not have individual monuments. Buildings were constructed over filled cemeteries due to city real-estate pressure. Because of changing mindsets, urban Americans wanted to be able to visit an individual’s grave.

Urban health crises also changed American attitudes towards burial practices. Cemeteries were seen as generators of disease-causing miasmas. After an 1822 epidemic in New York City, Dr. Jacob Bigelow advocated for a cemetery outside of Boston to prevent epidemics. He ultimately led the city’s elites in the cemetery’s creation.

Mount Auburn was founded in 1831 to provide a cemetery outside of Boston to improve sanitation and to provide a place for people to be individually buried and remembered. The cemetery was designed in the naturalistic Picturesque style that was popular with Boston’s transcendentalists. Because of the founders’ Unitarian and transcendentalist ideologies, the cemetery was nondenominational and anyone could purchase a lot. 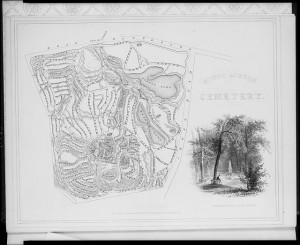 This early map of Mount Auburn shows the topography, curved roads, and water features common in the Picturesque style. Image courtesy of the Library of Congress

Under transcendentalist and Jacksonian ideologies, Mount Auburn Cemetery became a cultural institution for the instruction of morality. Bostonians could escape the morally-ambiguous city and the social upheaval of the industrial revolution to contemplate mortality, morality, and civic virtue. Despite these beliefs advocated by the elites, Mount Auburn also became a place of recreation and a tourist attraction. Mount Auburn acquired such popularity as a solution to urban problems that other American cities began to emulate Boston, beginning the rural cemetery movement. By the 1850s, most cities and large towns had a rural cemetery. 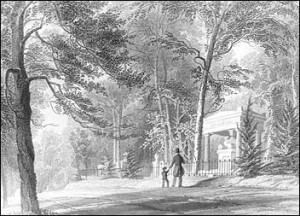 This image shows how Bostonians were supposed to use the space for the contemplation of mortality. Liberal religious leaders encouraged children to visit the cemetery with the hopes that they would become moral adults. Image courtesy of the National Park Service

Americans’ use of rural cemeteries as recreational spaces stimulated the urban parks movement. Andrew Jackson Downing pushed for a park in New York City that would provide residents with the same moral and recreational benefits as the rural cemeteries. Frederick Law Olmstead ultimately designed Central Park in the 1850s, beginning the urban parks movement.

This map shows the Emerald Necklace, an urban park designed by Frederick Law Olmstead. It shares many of the Picturesque design elements of Mount Auburn. Image courtesy of Wikipedia.

Rural cemeteries also influenced the romantic suburbs designed by Downing in the mid-1800s. Suburbs created naturalistic places for the wealthy to live away from the corruptness of the city in a space that did not have to be shared with lower classes seeking recreation. 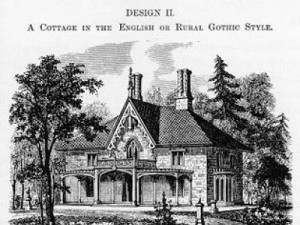 This image shows one of Andrew Jackson Downing’s designs for a house in the romantic suburbs. Note the similarities between its landscape setting and the landscape of Mount Auburn. Image courtesy of Travel Studies.

Eventually, the popularity of rural cemeteries like Mount Auburn decreased because designers and the public demonstrated a preference for recreational spaces without the graves and funeral processions. Additionally, the massive casualties of the Civil War abruptly ended mass culture’s sentimentalism of death.