Why:  For Winthrop, Boston would be a “‘city of God,’”and he believed that “perfect love toward God and mankind” resulted in a “godly use of property.”2 Although Winthrop’s goal of creating central community did not initially happen, the belief that he had the divine right to settle in Boston and create a city there, shows how Winthrop utilized the concept of first nature to claim the Massachusetts Peninsula for the Massachusetts Bay Company.3 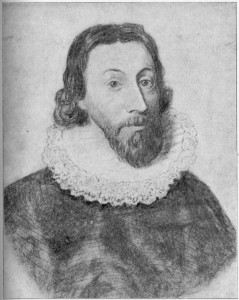 Once established, the concept first nature was not going to be able to keep Boston running as a city. Bostonians made use of second nature by filling in tidal flats and marshes to try to create residential areas. One noteworthy example of land manipulation and second nature is the cutting of Beacon Hill to fill Mill Pond in the early nineteenth century. This project was proposed primarily for the purpose of increasing the amount of land that made up Boston.

Who: The city of Boston and the Mill Pond Corporation

Why: Soil and gravel from Beacon Hill was used to fill up Mill Pond in order to accommodate the growing population and expanding city. From 1790 to 1825, the population of Boston increased by approximately 39,957 inhabitants, and so the city, as well as private real estate owners began looking towards areas of the city that were mostly undeveloped to create homes and develop residential areas. Mill Pond, which had been artificially built to power mills, eventually became the site for Boston’s waste. Therefore, Mill Pond was not being used for its original purpose, and so it appeared to be the best place for the city to spread to. 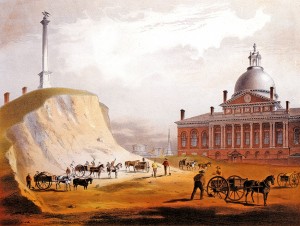 Filling carts with soil and gravel from Beacon Hill to take to Mill Pond.

On March 6, 1804, private real estate owners convinced Boston’s General Court to annex the area of Dorchester Neck for Boston, which is where Mill Pond was located.4 Then, three days later, the Mill Pond Corporation was created for the purpose of “filling the pond with soil from Beacon Hill.”5 The members of the corporation included the successors to the proprietors of the mills that created and used Mill Pond in 1643.6 The slow cutting down of Beacon Hill and transportation of the hill’s  soil to Mill Pond continued throughout the 1820s. In 1824, Beacon Hill was reduced to its present day height. The Mill Pond project was finally completed in 1828.7 The area never flourished as a residential area, however, because the project took too long, and up though 1824, much of the area was still filled with water.8 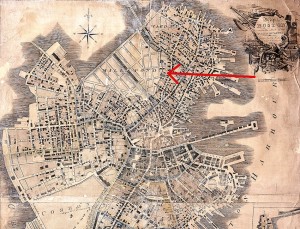 Map showing the completion of the filling of Mill Pond.

Images in Order of Appearance: