In the early 19th century, most children were lucky if they were afforded the chance to go to grade school – let alone college. College itself was inaccessible to all but the most elite of the elite, serving primarily to reinforce class standings and arrange marriages. Through expanding curricula and attendance, Boston’s educational system experienced drastic progressive changes in the 19th century, making more available to more people and leading the way for the rest of the country. 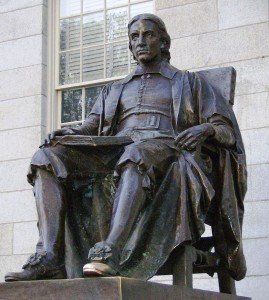 A representation of one of the school’s benefactors, John Harvard. The inscription below reads “John Harvard – Founder – 1638”

Harvard, Boston’s forefront school and arguably the most well-known university in America, was founded in 1636. Named for a deceased benefactor, Rev. John Harvard, it began as a religious institution; focused on religion, the curriculum emphasized “theoretical observations of the language, and logic, and in practical spiritual truths.” The founders of the university were strongly against social integration, believing civic function of the school was as important as religious purpose.

In the 1850s, as he attended Harvard, Henry Adams wrote a scathing report of his time at the school, criticizing it as something that no one took seriously, which bettered nobody, and that “All went there because their friends went there, and the college was their idea of social self-respect.” Despite these words, in this time Harvard was “increasingly strong and increasingly envied across the nation.” How so, if Adams’s assessment was so negative? 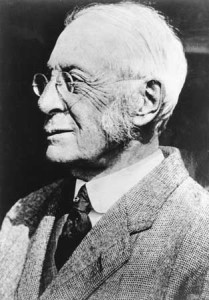 Eliot, 1834-1926. President of Harvard for 40 years, he implemented significant changes to the university’s structure.

Charles William Eliot, becoming president of the university in 1969, enacted some far-reaching changes to the school. He expanded the school by adding a graduate department (1872), women’s college (the Society for the Collegiate Instruction of Women, 1879), the school of Landscape Architecture (1901); he also expanded the Arts & Sciences and Medical School’s curriculum.

In addition to these changes, Eliot ended many longstanding requirements for students. Compulsory chapel was abandoned in 1886, shedding the school’s religious roots. The undergraduate requirement in Greek was lifted in 1887, and the school’s “scale of merit” (in which the President kept personal score of demerits, based off of their opinion) was removed in 1886-7.

Perhaps the most important change was that to the base curriculum; during Eliot’s presidency Harvard developed what is called the spontaneous diversity of choice.” I.e., students could choose their own courses, instead of their coursework being dictated by their year at the institution.

“One after the other, the greater universities of the country followed the reforms that Harvard had adopted; it was clear by the middle nineties that the Harvard of Eliot […] had set new standards for higher education in America,”
-Samuel Eliot Morison

As Morison stated, other universities within Massachusetts and nationwide began to adopt changes made to Harvard. While the school still focused on the elite students of the time, the flexibility introduced with these initiatives began allowing more and more students to attend, if not at Harvard, then at other universities being made available through federal and state programs. Boston truly pioneered modern education, paving the way for the system we’re now familiar with.