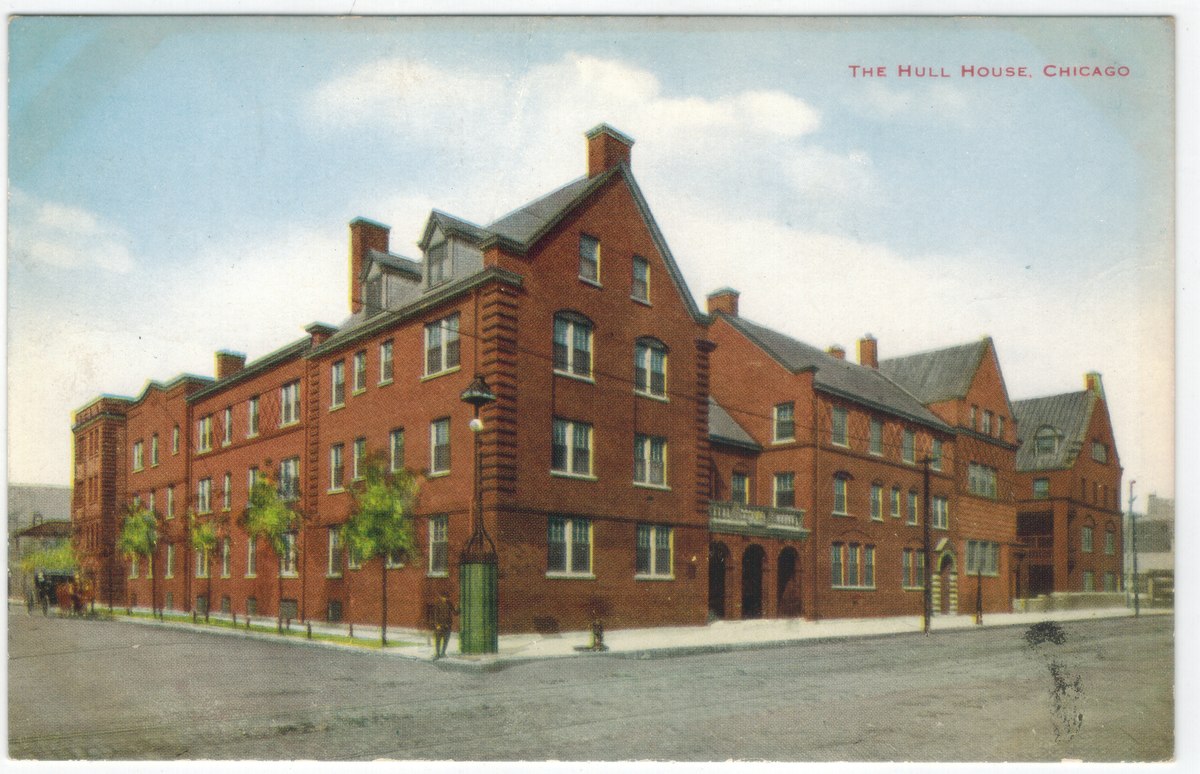 Wikipedia.com; the Hull House illustrated on a postcard.

The Hull House was founded in 1889 by Jane Addams as an establishment for the large immigrant population of the nineteenth ward to utilize as a place of education.[1] The nineteenth ward was filled with immigrants from Eastern Europe and were discriminated against due to their heritages. Addams and the Hull House wanted to create a safe space for the residents of the ward to participate in education and local clubs and organizations.  The Hull House was the first of its kind in America, but Addams drew inspiration from the settlement house she visited in London: Toynbee Hall. Toynbee Hall was created as a place for middle class activists to research and analyze poverty in a specific area of London. The same premise was applied to Chicago with Addams’ project.

Jane Addams Papers Project; children at the Hull House during Christmas, circa. 1900

Quickly after the establishment was opened, Addams realized that the mothers from the neighborhood could not attend a lot of their lectures and courses because they had young children to take care. Addams saw the need of the community and found a way to address it: daycare services and the beginnings of a kindergarten class were held at the Hull House beginning in 1891[2]. The courses held at the house ranged from English courses for non-native speakers to lessons on how to care for a baby’s nutrition and the science behind hygiene. Expanding beyond the basic services that daycare provides for mothers, the Hull House also gave a form of privacy to families. Tenement housing forced families to live close to each other and rely heavily on the help of neighbors. Without a daycare service, women were relying on each other to watch their children as they attended errands or work. With the addition of a professionally ran daycare system, immigrant and working class mothers could drop their children off there and go wherever they need to. With the help of the Hull House, the families of the nineteenth ward no longer needed to rely as heavily on one another. This allowed individual families to develop a more private relationship with one another as they no longer had to expose everything that they were doing to their neighbors.

The employees of the Hull House were middle class men and women who could stay in dormitories on the campus. While the house itself was helpful to the immigrant mothers of the direct community, the workers of the house did not confine their activism to campus grounds. Florence Kelley, one of the young ladies who worked at the Hull House, would later fight greatly for the rights of the working class. She fought for child labor laws and was at the forefront for standardizing conditions in factories. Kelley was appointed as the first female inspector of factories and helped the position be spread to all factories in Chicago.[3] Edith and Grace Abbott were activists long before they joined the ranks of the Hull House, but their work in Chicago supporting the child labor movement gave way to Grace Abbott being given the title of “Mother of All Uncle Sam’s Children”.[5] The Abbott sisters were also active participants in the causes of women entering the workforce and fighting for better conditions in tenement housings across America.[4]

Jane Addams would also serve the greater community through her activism outside of the Hull House. Publicly funded trash disposal and general waste removal was not implicated throughout cities during this time period. Addams fought for the contracts of a trash removal company for the nineteenth ward but was turned down. She continued to demand some sort of response and was eventually appointed inspector for the ward.[6]

The services of the Hull House eased the lives of many working class mothers and aided in the education of the nineteenth ward. Without the contributions of women like Jane Addams and Florence Kelley, many issues in working class neighborhoods would have went unheard. The Hull House served as a balance between the impoverished immigrants and the middle class workers.

[1] Lela B. Costin, Two Sisters for Social Justice: A Biography of Grace and Edith Abbott, (Illinois: University of Chicago, 1983), 42.