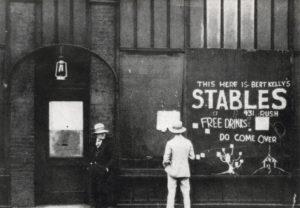 The 18th Amendment to the Constitution instated Prohibition throughout America. While it was rallied and put forth by puritanical values, its greatest profits would be the organized crime, corruption, and gangster culture that it created. While bootleggers, speakeasies, and organized crime would grow all throughout America during Prohibition, Chicago was a standout with its reputation throughout the country as being a center for this new criminal business. 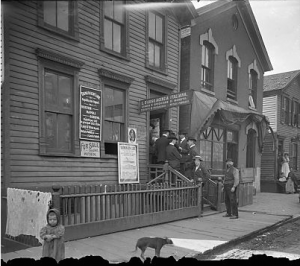 This Italian agency located on Taylor street provides services such as international money transfers, which was important for Italians who still had close ties with their homes and family members in Italy

The preexisting circumstances and environment of Chicago was the perfect location for a boom in organized crime. A large, ostracized community of immigrants (both Italians and Jews,), poor living conditions, existing political corruption, and of course Prohibition itself created a perfect storm of conditions for the boom of organized crime. As these new immigrants had to rely upon each other, close connections were formed. As many of them joined the new, lucrative business of organized crime, they would become involved whether actively or by simply allowing their neighbors-now criminals-to store their contraband in their basements.

Even if they were not part of the same family, or even within the same community, these bootleggers were not criminals; they were modern day Robin Hoods. Beloved by the poor communities that suddenly would get an influx of support from the city infrastructure, or from gangs like The Chicago Outfit.

With the ratification of the Twenty-first Amendment in 1933, Prohibition was repealed. The damage was already done however, as the public’s faith of law enforcement had been flipped. Organized Crime had become a business, infiltrating and corrupting the city governments and other businesses of the cities that they were in. While the true nature of some of these gangs would begin to show, the mystique and the allure of the gangster with their smart suits, long hats, and even longer Tommy Guns allured the cinema and America, and would continue to do so for years.

Hirsch, Susan E. Roots of the American Working Class: The Industrialization of Crafts in Newark, 1800-1860. Newark: University of Pennsylvania Press, 1978.