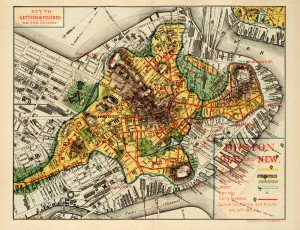 The Puritans arrived on Shawmut Peninsula, now known as Boston, in 1630. They were greeted by a very different topography than exists today, in terms of both shoreline and terrain. The original shoreline consisted of 783 acres.[1] Instead of today’s cityscape, there was rugged terrain, defined by five hilltops. Three of these hilltops almost seemed to merge together, looming large over the tiny peninsula, and provided a new identity for the area: Tremont, or Trimountain.[2] These three hills still exist, but have been significantly altered.

Boston grew into a thriving city over the next 200 years, complete with a busy port and elite culture. As Boston entered the nineteenth century, its leaders began to envision it as one of the great cities of the world. The population increased drastically at this time, and land became scarce. Land along the shorelines began to be filled in as needed as early as 1804. However the most radical land-fill operation carried out in Boston was that of the Back Bay, which symbolized “Boston’s wealth and optimism in the late 1850’s and the pride and ambition of her civic leaders.”[3]

The Back Bay had been dammed in 1821, and crossed by railroad causeways shortly thereafter. These projects, especially the dam, created horrendous pollution that affected the surrounding air and water, as well as land values.[4] The filling of the bay not only corrected these environmental problems, but provided an additional 450 acres for Boston.

While Boston strove to become a great city of the world, the Commonwealth of Massachusetts recognized it as their greatest asset. The immense project of filling the Back Bay was facilitated by an agreement between the state, the city, and the Boston Water-Power Company.[5] The state viewed these improvements as an investment that would “make a port for Massachusetts of unrivalled capacity and promise for the future.”[6] Massachusetts and the power company each received 108 acres, and land was devoted to elite institutions such as the Natural History Society, the Institute of Technology, and Trinity Church.[7] The state spent over $1.6 million over the course of more than thirty years of continuous, round the clock filling. At the time “The Memorial History of Boston” was printed in 1881, the state had netted about $3 million from the sale of land within the Back Bay.

As intended from the beginning, the Back Bay became home to many of Boston’s upper-class residents, and is now maintained as a historical district.