The rise of organized crime in Chicago can be attributed to a multitude of factors, however two of the most prevalent of these are the “urban renewal” of the Levee district and the introduction of the 18th amendment to the United States Constitution, otherwise known as Prohibition. 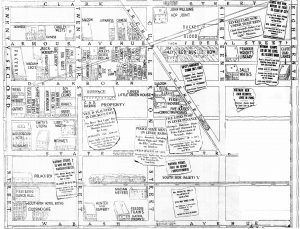 The Levee District is a two square block location found in an area known as South Loop. It  was the last major red-light district in the city, running at the top from the 1880s to 1912 and was home to some of the most famous establishments that the seedy underbelly of Chicago has ever known. The most famous of these is the Everleigh club. Run by two sisters from New York City, the Everleigh club was the high standard of what a brothel could be. It was frequented by many famous figures of the early 20th century including World Champion boxer Jack Johnson and Prince Henrik of Prussia. The Levee districts run came to an end after the murder of Marshall Field Jr. in 1912. With jealously in their hearts, other brothel owners from around Chicago blamed the death on the Everleigh sisters and the police were forced to raid the building and put an end to it. With its major draw gone and most other underworld businesses leaving soon, the Levee District’s reign at the top came to an end.

The next major contributor to the rise of organized crime was that of Prohibition. It is easy to understand why Prohibition would play a role, as alcohol has been very popular throughout the world since its discovery. But the effect that Prohibition had on the rise to organized crime was that it put a foot in the door for these crime syndicates to take advantage of. Men and women wanted their alcohol, and if they could not get it legally they would get it illegally. Groups like the Chicago Outfit and the North Side Gang were known for this. They would do something known as Bootlegging to import alcohol into the country and then bring it into the city to sell at speakeasies, or illegal bars, that they ran making large gross profits off of every sale. The most well-known Gangster of this era was Al Capone, who was a master at the business aspect of these crimes. Capone possibly contributed the most to organized crime’s rise as he perfected the business aspect of it. Capone is mostly remembered for the St. Valentine’s Day Massacre where he allegedly ordered the murder of many members of the rival North Side Gang to be murdered. The aftermath of this incident created a massive desire to rid crime from Chicago’s streets and led to Probation Agent Elliot Ness’s masterful scheme to take down Capone. 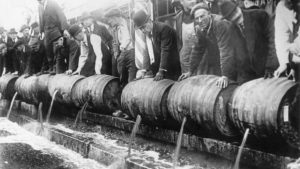 Truly organized crime has never left the streets of Chicago, but following the 21st amendment to the Constitution, the syndicates began to operate less in the light of day and more in the dark. Its rise can be contributed to many factors, but the biggest were that of the lack of an area for criminals and seedy figures to congregate and the introduction of Prohibition to the United States. These two, assisted by figures like Capone and Moran, created the organized crime boom of the early 20th century.