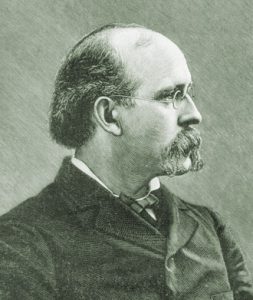 Terrance V. Powderly, the Grand Master Workman of the Knights of Labor from 1879 to 1893.

The Knights of Labor (KoL) were the first national labor organization of the Gilded Age. The KoL was founded in Philadelphia during 1869. The organization grew slowly over the course of the 1870s before exploding in membership during the mid-1880s, increasing from 28,000 members in 1880 to around 800,000 in 1886. While this period seemed like it contained the makings of a grand and powerful national labor movement, the KoL quickly collapsed, leaving the group with only 100,000 members by1890, with a continued decline into irrelevance in the coming decade. Chicago was one of the hearts of the movement which makes the city a perfect case study for determining the fate of the Knights. While the first signal event of the Knights’ rise happened outside of Chicago, it was crucial to determining the pattern which would continue to win the support of the working-class in Chicago.

In 1885 the Knights won a strike against a major robber baron, Jay Gould, and the Southwest Railroad Conglomerate. This strike was the first successful labor action conducted against a major company and is credited with creating a national cognitive shift in the national working-class. Shortly after the success of the strike, the Chicago KoL District Assembly 57 (a notable hub for radicals within the organization) began a sweeping campaign of boycotts and solidarity strikes in support of popular causes and trade union strikes, the most popular of which was the boycott of a network of firms using prison labor instead of free labor. The boycotts were a resounding success and brought flocks of Chicago workers from both skilled trade unions and the unskilled industrial masses.

However, many of these new members were ignorant of the traditional culture of the Knights. The national leadership and some elements within the local Chicago leadership favored a slow and steady course for the labor movement and abhorred the strike on both practical and ideological grounds. The leadership was invested in a transformation of society to a form where a form of cooperative enterprise comprised of producers would be the unit of economic production. According to the upper echelons of the Knights, strikes were a dangerous and difficult form of resistance which often served to turn public opinion against labor in return for temporary gains in wages. Overly aggressive use of the boycott was looked down upon for the same reasons. Instead, labor should organize to achieve transformational social change through America’s republican institutions, although the exact method through which this would be accomplished was often left vague. While the leadership preached restraint, the new rank-and-file were drawn to the organization in large part because of the practical gains the KoL had made for them with aggressive use of boycotts and strikes. 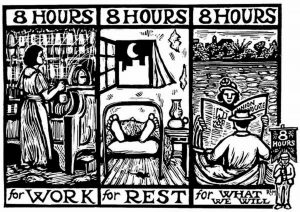 The different interests of the leadership and the membership were brought to the fore in the eight-hour day movement of 1886. The national leadership disavowed the movement as dangerous and unwise, but the rank-and-file of Chicago embraced the demand with enthusiasm. In the aftermath of the Haymarket Affair, the leadership doubled down on their disavowal of radicalism and violence and refused to support the amnesty movement for the anarchist leaders who had been accused of instigating the Haymarket bombing. The movement had achieved incredible popularity with the workers of Chicago. Piling on top of the movement’s political schism, the national leadership intervened to squash multiple unauthorized strikes that had been started by local KoL assemblies. The 1887 carpenters strike is especially illustrative of the deleterious effects of national meddling. Carpenters associated with both the KoL and a national carpenters trade union struck local contractors in defense of the eight-hour day they had won the previous year. As the strike wore on, both groups appealed to the national organizations for aid. The Knights denied aid, while the trade union granted it. The local Knights’ efforts collapsed, while the trade unionists won their strike. In the aftermath, the Knights lost the majority of their members within the carpentry trade. Events such as this combined with the internal political squabbling between the rank-and-file and the leadership to create a rapid downward spiral from which the KoL never recovered. 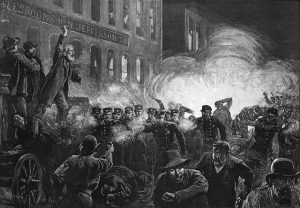 The most famous sketch to be produced depicting the Haymarket Affair