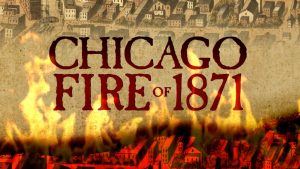 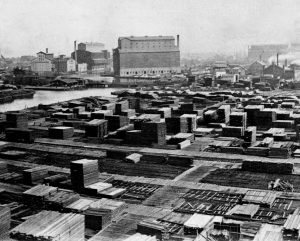 Today, Chicago stands as a beacon of industry, a center of transportation, and a hub of international finance.  One of the most magical cities in the country, Chicago evolved from a desolate trading post of some thirty souls to a city of more than three hundred thousand in 1871.  The city of Chicago literally grew out of the lumber industry.

The lumber trade began in 1837, when the first cargo of whitewood arrived from St. Joseph, Michigan.  Logged in the forests of Wisconsin and Michigan, lumber was moved to Chicago via water, then processed and sold.[1]  Chicago’s lumber industry grew with its population.

Charted in 1837, its population was spurred by an influx of immigration due to inexpensive land and opportunity.  Arriving almost daily, new residents needed housing quickly.  It was not uncommon for a house to erected in less than a week.  This hasty construction allowed for houses to be of the “cheapest and most primitive character for human habitation” using lumber as the primary building material. [2] Lumber was also used to pave streets and create sidewalks between residences. 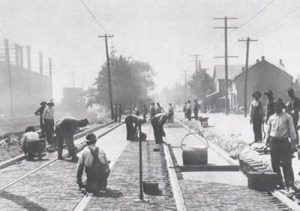 The need for low cost and quick construction allowed for a new technique to be developed called balloon framing.  This technique differed from the laborious timber framing method.  Balloon framing, characterized by its use of thinner, standardized lumber, and the use of machine-made nails required less skilled craftsmen, permitting “new structures to be erected more quickly by two men than the heavy timber frame by twenty.” [3] 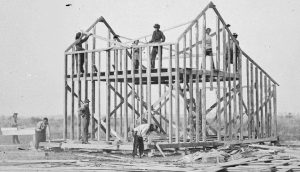 Balloon framing was the preferred means of construction due to cost and efficiency.  Timber framing used fewer but larger and more expensive pieces of lumber for support.  This design allowed large spaces between supports.  In these areas, diagonal pieces were inserted to strengthen the structure.  These pieces acted as firebreaks within the walls.  In balloon framing the smaller pieces of lumber, spaced closer together, were left unobstructed.  It was the unobstructed areas that allowed fires in these structures to spread quickly.

The weather also played a roll in the Great Conflagration of 1871.  An unseasonably warm fall, coupled with a summer of almost no rain, left Chicago nothing more than a tinderbox waiting to be ignited.  Between July 4, and October 8, Chicago received only one inch of rain.

The Great Conflagration of 1871 began on October 8, at approximately 9:00 pm.  The fire quickly grew out-of-hand and ravaged the city.  Burning through an entire block within an hour, the fire might have been contained if it had not been for the strong southwesterly winds. 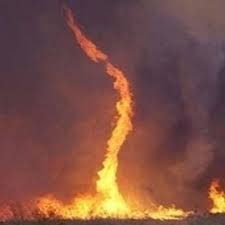 The winds, reported as high as sixty miles per hour, “were actually convection whirls, or fire devils, superheated columns of extremely hot air rising from a fire and sent in a rotating, tornado-like motion by cooler descending air.”[4] The fire burned through the night, and throughout the next day until the winds died down and the fire was able to burn itself out.  At about eleven o’clock on Monday evening, October 10, a cold drizzle began to fall making certain that the fire would not flare up again.

[1] Chicago, by 1870, had both the largest lumber yard and fleet in the world and possessed the largest market for forest products.  Entire city blocks contained nothing, but docks and yards covered with white pine stacked as high as twelve feet or more.  Chicago received over two hundred loads full of lumber every twelve hours by 1870.  The lumber districts became the home to a host of allied industries, including furniture manufacturing, piano factories, and wagon and shipbuilding; Miller, City of the Century Donald L. Miller, City of the Century:  The Epic of Chicago and the Making of America, (New York:  Simon & Schuster, 1996), 143.

[3] Credit for the invention of the balloon framing is generally given George W. Snow.  Although some historians disagree with this view.  Balloon framing is a type of construction that became popular in Chicago, IL in the nineteenth century.  St. Mary’s Catholic Church is credited as the first building using this construction technique. Balloon framing was used widely in Chicago spreading to the Ohio Valley and eventually to the East where it was called Chicago construction.  Balloon Framing uses 2X4 or 2X6 studs, nailed to a vertical plate at the top and bottom. Walls could be built on the ground and raised in place. Jackson, Crabgrass Frontier: The Suburbanization of the United States, (New York:  Oxford University Press, 1985), 126; Miller, City of the Century, 84.