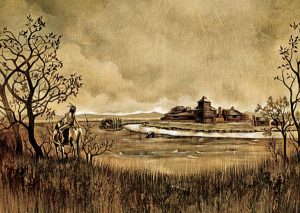 The land where Chicago currently stands today has always been a wetland environment.

Chicago has always had a close relationship with its surrounding environment, as the environmental features around Chicago are what forced the city to be created.[1] In modern times, natural and accompanying economic factors will continue to shape infrastructure and city planning practices of Chicago due to its changing environmental features caused by climate change. The connections the city had to important environmental and economic resources made it an ideal geographic location for a major economic center, however the environmental features of the land itself isn’t necessarily ideal for a city with a large population. The city of Chicago was essentially built on swampland that routinely flooded and the addition of sidewalks, streets, and buildings increased rain runoff worsening the flooding problem.[2] The Chicago River, which at the time was described as “a sluggish, slimy stream, too lazy to clean itself”[3] was the main tool for waste and storm water management, as it carried water east out of the city towards Lake Michigan.[4] 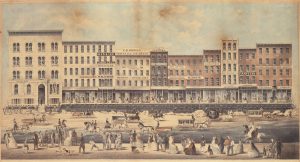 The city of Chicago was physically raised an average of ten feet using jacks in order to put a new drainage and sewer system underneath the city.

This proved to be a problem, however as this led to Lake Michigan, which is where the city got drinking water from, to become contaminated around the shore. To fix this, along with the flooding issues which plagued the city, the entire city was physically raised an average of ten feet using jacks.[5] A draining system was placed underneath much of downtown in order to help the Chicago River better drain the city and its wastewater. However, this still proved to be ineffective, so the Chicago Board of Sewerage Commissioners physically reversed the flow of the Chicago River in the early 20th century, making the river drain west through the Mississippi River Basin.[6] This temporarily fixed the problem, and Chicago’s precarious relationship with its surrounding environment will only become more uncertain as climate change continues to become a bigger issue.

In 1972, the city of Chicago created a plan to help with the overflowing of the drainage and sewer systems within the city.[7] The Tunnel and Reservoir Plan, TARP,  began in 1972, but isn’t predicted to be completely finished until 2029.[8] Currently, it is the world’s largest gate and tunnel drainage system in the world, and has already cost the city a grand total of 3.5 million dollars through its level of completion in 2019.[9] While this new drainage system will, and does, help the city, Chicago will struggle with adapting to the increase in temperature and rain caused by climate change. In 1992, Chicago experienced a flood that had downtown underwater for almost an entire week, costing the city 5.5 million dollars in damages alone.[10] 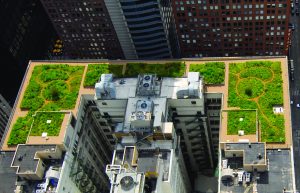 The City Hall building of Chicago has created a roof top garden as a part of their efforts to make the city more environmentally friendly.

This occurred with some of the TARP in place. As the city’s climate continues to change, Chicago’s government has began to make more smaller scale urban planning and infrastructure changes to help the city. The Green Alley Project was created in Chicago to place more permeable material in alleys and fix their pitch to make them more efficient when draining.[11] The city hall building has even created a garden on its roof to help with drainage.[12] More changes to urban planning practices and infrastructure will occur in Chicago in response to the impacts of climate change felt within the city.