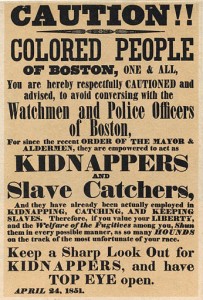 At first glimpse one might be persuaded that Boston was a city beyond it’s time in the Antebellum period in the United States. Not only is it given credit (even though as previously stated the Quakers started it) for the abolitionist movement it is seen as, “a leader in legal equality, repealing racial laws and avoiding the restrictions common elsewhere.”[2] This statement has a lot of merit, in 1780 the state of Massachusetts outlawed slavery, also African Americans established the right to vote in 1790, and around 1855 the state had passed legislature for desegregation. Unfortunately though the idea that African Americans would have an impact on the election day in Boston was just an idea. The total African American population in Boston in 1830 was 1,875 people and in 1860 increased a measly 386 people to equal 2,261 people, and the the African American population in Boston accounted for 3.1 percent of the total population in 1830 and drops to 1.3 in 1860.[3] The population of African Americans is just so small within Boston that they really would not have much of an impact on any major decisions that would be voted on. Therefore Boston can allow African American’s to vote and appear to the rest of the United States to be progressive when in fact unfortunately their vote counts for almost nothing.

The next feature of Boston that supports that Boston is still a highly racist city is the ideas about African Americans that are believed by many abolitionists during this time period. The first belief to point out is the white abolitionists’ fight against slavery instead of for equality. This pitted many African Americans against the abolitionists, because while they were against slavery they wanted to be treated equally and not seen as inferior’s within Boston as well and this was just not the mission of the majority of white abolitionist in Boston during the Antebellum period.[4] There were several reasons for these abolitionist to want to fight slavery even if they were not concerned with equality one being to protect the institution of free labor. One of the main points of the free soil party during this time was that slavery was bad for capitalism and that slavery needed to not be expanded into new states, because slavery takes jobs away from people.[5]