The focus of this research project is on Boston’s external and physical transformation in the 19th century. Throughout the 1800s, Boston’s boundaries expanded as its population increased. The natural development of this seaport town to a manufacturing city relied on the population increase. Boston’s revolution and transportation advancement is seen in every decade of the 19th century. Boston’s boundaries naturally grew for economic reasons during the mid-1800s. Avenues of intercity transportation developed and shaped the area’s economy. In 1821, the Middlesex Canal was created, and extended small river networks to surrounding areas, such as Lowell and New Hampshire. By the 1850s, extensive networks of railroads formed facilitating the region’s industry and commerce. This period also saw the development of turnpikes to aid city transportation. 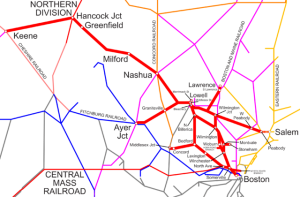 A shift in types of transportation occurred in the middle to later part of the 1800s. The city’s focus changed from intercity to intracity transportation. Boston faced a growing volume of people and traffic; and an expansion of suburbs. By the 20th century’s first decade, the 1850 city with its two-mile radius had become a metropolis with a ten-mile radius and a population of more than one million.[1] New developments reflected the rising city population. Street car suburbs emerged in the final decades of the 1800s. For example, residential communities like Brookline were shaped by streetcar lines as the means of transportation. This shows that city expansion grew from new methods of transportation, which started from the high density of inhabitants in Boston. However, there was a need for rapid transit. Boston’s physical landscape, unlike New York City, housed narrow and crooked streets, so it could not hold elevated rail lines. Surface transit was inadequate and impractical, and the only other option was underground. The city of Boston built a city-financed and city-owned subway in the 1890s. Better transportation permitted greater spread of the population into suburbs and heavier concentration of business activity downtown. As Boston grew, the complexity of traffic patterns and the dependency of people on the transit system increased.