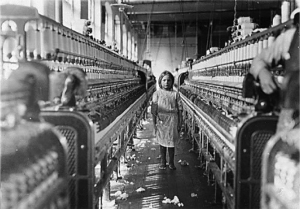 As industrialization swept through major cities during the early 19th century, infrastructure such as factories and mills became a sole source of labor and capital. In the outskirts of Boston, in the town of Lowell, Massachusetts, outside of all the chaos, crowds and noise grew a rural version of an industrial city. Both the space that the mills occupied and the social reasons for being built outside of the city have made it particularly interesting. As people began to recognize the desires for contact with greenery that was needed in the city, families also realized the security that these mills would provide for their young daughters outside of the chaotic and immoral city. The possibility for nature and industry to compliment one another was the goal of the water-driven Lowell Mills unlike other coal burning steam machinery in Boston. As the inner city grew immensely so did the temptations and vices of city life. As a result of the Lowell Mills, nature and the rural landscape became valid sources for moral guidance and sustenance.

The nature and greenery that was a defining feature of the Lowell Mills was unlike any other industrialized space. Beginning in the 1820s, industrialization produced profound and violent disruptions in the culture of the northeastern United States. Lowell, Massachusetts, grew from a rural village of 1500 people in 1820 to a manufacturing city of 33,000 in 1850. The culture of the Lowell Mills offered opportunities for natural growth as well as an urban vision for mindful design that would sustain this regions ecology. In a more cultural sense, the Lowell Mills portrayed a new vision of work life for women that took them away from the negatives of city life such as prostitution. These mills provided women with opportunities to work that were not harmful to the social fabric of women’s lives. “Embedding green space visibly and inextricably in social and economic relationships, Lowell’s nineteenth-century design provides a practical template and an imaginative paradigm for a concept of nature that embraces densely populated cities, even industrial ones.”[1] Unlike any other city in America during this periodization,   Lowell’s progress was truly progressive in both a spatial and cultural sense.

[1] Weiss, Jane, “In the Mills We Are Not So Far From God and Nature: Industrialization   and Spirituality in Nineteenth-century New England, ” Journal for the Study of Religion, Nature, and Culture 5, no. 1 (March 2011): 97.