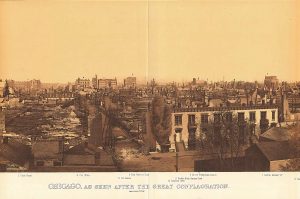 Ruins of the 1871 Great Fire of Chicago

Since the year 1871, the city of Chicago has never been the same.  The fire that shook the entire world ushered Chicago into a new era. Due to the city’s detailed face-lift in architecture and new industrial perspective, Chicago rose above the ashes to take its position in the United States as the golden child of urbanization and dominated the West as the leader of processing natural resources.  From enhanced safety regulations to a new and influential reputation, the city has become an example to the world of how one major catastrophe can shape the future development of a population.  For instance, much of what used to be ash is now magnificent displays architecture and engineering ingenuity.  Neighborhoods thrived, and the city’s layout enhanced its urbanization process.  Nearly 100 hundred years later, Chicago witnessed the construction of the Sears Tower which is one of the tallest buildings in the world.  The city of Chicago definitely deserves the title as one of the most urbanized cities in the world.

Following the catastrophe, residents were found to be on the periphery.  This change brought about the introduction of yet another innovation: Commuter suburbs.  Similar to New York, once again, the periphery of the center of the business district allowed for the use of improved transportation to the city center.  Prior to the fire, the city lacked the means of suburban transportation compared to that of the era following the Great Fire of 1871.  Previously, street cars moved by horses were utilized by commuters.  However, ideas and concepts of how to incorporate commuting with innovations of improved suburbs were mapped; leading to the production of street cars.  These cars were similar to railways in that they operated on tracks below and a cable above to ensure a pleasant commute.  Upon the invention of street cable cars, Chicago commuting grew tremendously and flourished for many years thereafter.  Commuters were more comfortable in such means of transportation, experiencing less unpleasant trips to and from the city center. 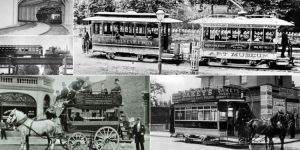 The Great Fire of 1871 was a significant factor in the development of architecture in Chicago.  It created a passion and served as inspiration for the reconstruction which took place in the city.  It marked a new beginning, not only for Chicago, but also for the thousands and millions that populated Chicago following the city’s rebirth. 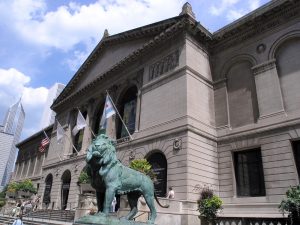 Instead of slaughtering livestock that would need to be shipped long distances to consumers, living animals were shipped by train.  It was Chicago, the city that had once been destroyed a tremendous fire, that now introduced to the world a new concept of a stockyard.  This new stockyard involved the care of livestock waiting to be transported rather than being slaughtered. 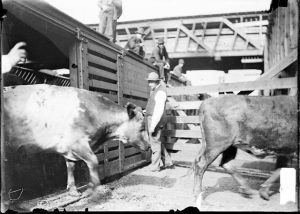 The Chicago Fire of 1871 brought about a significant change for the city of Chicago on the world stage.  Due to the innovation and idea of destiny within the minds of engineers and architects, the city was able to rise above the ashes in order to reclaim that which had been lost and gain so much more.  As a world example in architecture and industrialization, Chicago enhanced many common techniques which positively influenced the success of its economy; all of which was put on display for the world to see at the World’s Columbian Exposition in Chicago.  The city’s detailed face-lift in architecture and new industrial perspective truly propelled Chicago to its position in the United States as the golden child of urbanization and its domination the West as the leader of processing and distributing natural resources.

“Cattle walking from a railroad car into a fenced area at the stockyards.” Explore Chicago Collections. Accessed April 26, 2019. https://explore.chicagocollections.org/image/chicagohistory/71/z60c770/.