From July 27, 1919 to August 3, 1919, Chicago was engulfed in a bloody five day Race Riot. One of the biggest riots to take place that summer in the United States, it left thirty-eight people dead and over 500 injured. The final event that sparked the riots was the death of Eugene Williams. He and his friends were swimming in the river and got close to the 29th Street beach that was designated as “White Only.” The beach had just calmed down from a small skirmish that began when some black beach goers that were determined to enjoy the beach chased off white beach goers with rocks. A white man hit Eugene and he ended up drowning. After the boys get a black officer and identify the man still at the 29th Street beach, a white officer refuses to allow the write man to be arrested. Crowds begin to gather, a black man fires his revolver at police, injuring one. A black officer fires and kills the man, other shots were fired from within the crowds and the violence spilled over to the rest of the city over the next five days. 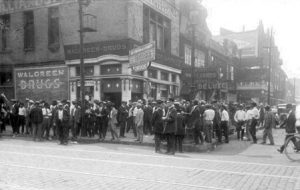 Gathering of African-Americans in front of a Walgreens Drug Store

One of the first big contributions that lead up to the riots was the Pullman Strikes of 1894. Meat packing and slaughterhouse workers conducted a sympathetic strike in solidarity with a Railway Union. During this strike, the meat industry chose to hire strikebreakers. Many of the strikebreakers were African-Americans from Chicago. Some were brought in from other states as well. This act of hiring black strikebreakers set a precedent for many of the strikes that followed. Strikebreaker and scab became synonymous with black men, creating more racial tension. For the larger strikes in the 1900s, Chicago industries would bring in African-Americans by the trainload from Southern states to break strikes.

The competition for jobs was also made more difficult by the Great Migration of African-Americans from the Southern states to Northern cities. The Great Migration was a result of African-American families seeking to escape from the Jim Crow south. There were little economic opportunities for black men and women in the South, and with the rise of the KKK and an increase in lynchings, there was more incentive to move North. Many African-American families had already arrived in Chicago as a result of the strikebreakers, and they would write letters back to friends and family in the South of the better opportunities and quality of life. This migration created a large increase in population in Northern cities and caused several problems with overcrowding. In Chicago, the Real Estate Board tried to keep African-Americans from buying property or living anywhere but the South Side. 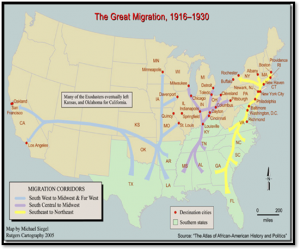 Map of The Great Migration

Competitions for jobs and housing was also exacerbated by the return of soldiers from WWI. WWI was the first war African-American soldiers saw action overseas. Although many units were still used for menial labor, loading and unloading supplies and building bases and camps, there were black soldiers from Chicago that joined the Harlem Hellfighters from New York in combat duty (albeit under French command). This marked a great opportunity for black men to prove they deserved equal rights and recognition for the service to their country. This increase in pride over their veterans gave other African-Americans more confidence to defend themselves and fight over the segregation. WWI also saw the first Red Scare and many white Americans began associating anything different as communist. There was nothing more different than whites in Northern cities than Southern blacks and many whites feared their social status was threatened by African-Americans. They were immediately associated as being the enemy and they were believed to possibly be prepared to rise up in revolution similar to the Bolshevik revolution.

All of these factors helped set racial tensions high and needed one last event to set off the powder keg. The Pullman Strike set the precedent for racial tension between union workers and black workers, the Great Migration increased the black population in the city greatly and increased competition for jobs with lower class whites, the return of veterans created more tension with racial pride, and the Red Scare gave Northern white Americans an easy excuse to hold more prejudice over African-Americans. 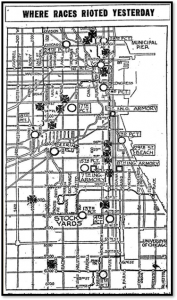 Newspaper map of the location of riots from one day