The Chicago Freedom Movement began in the summer of 1965 when Martin Luther King Jr. and the SCLC (Southern Christian Leadership Council) were invited to the city by the Coordinating Council of Community Organizations (CCCO). The Chicago Freedom Movement was also called the Chicago Open Housing Movement, which was led by Martin Luther King Jr., James Bevel, and Al Raby, and lasted from the summer of 1965 until August 1966. Dr. King visited Chicago many times prior to 1965 to build support for the Civil Rights Movement. In January 1966, he captured national attention when he moved into an apartment on Chicago’s West Side to protest the living conditions in the city. Later in the summer, Dr. King participated in marches into all-white neighborhoods that drew angry crowds. 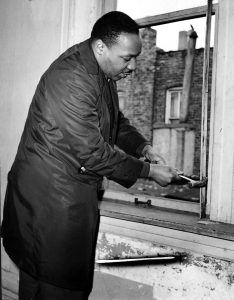 Martin Luther King Jr. helps remove a window frame while renovating an apartment at 1321 S. Loman Ave. in Chicago in 1966. King moved into a West Side apartment at 1550 S. Hamlin Ave. to highlight housing segregation issues in Chicago. 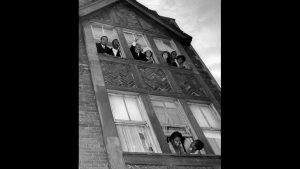 Martin Luther King Jr. and his wife, Coretta Scott King, wave to a crowd after moving into an apartment at 1550 S. Hamlin Ave. in 1966.

The Chicago Freedom Movement marches were part of a campaign to demand open housing, which was the primary demand, as well as quality education, transportation, and job access, income and employment, health, wealth generation, crime, and the criminal justice system, community development, tenants’ rights, and quality of life. King faced the challenge of mobilizing Chicago’s diverse black American community of nearly one million people. He cautioned against further violence and worked to counter the mounting resistance of working-class whites who were fearful of the impact of open housing on their neighborhoods.
By August, Chicago Mayor Richard Daley sought a way to end the demonstrations. After negotiating with King and various housing boards, an agreement was announced on August 26, 1966, in which the Chicago Housing Authority promised to build public housing in predominately white areas, and the Mortgage Bankers Association agreed to make mortgages available, regardless of race or neighborhood.[1] Two days after the July rally and march, King announced that the Chicago Freedom Movement would have a series of “Open City” marches through all-white Chicago or suburban neighborhoods. First, to ascertain where the marches would be held, real estate companies were approached by black and white couples. Each couple presented the exact same information such as income and educational background. Not surprisingly, most targeted real estate firms told the black couple that nothing was available, while the white couple was shown a variety of choices.
As we’ve seen in the context of this class, real estate agents were often targeted and harassed if they gave black families the opportunity to move into white neighborhoods. These strategies were often used by white homeowners in order to deter black Americans from moving into “white neighborhoods” and ensure that the neighborhoods they lived in could maintain their property values and perceived reputations.[2] Once the discriminatory practices of certain neighborhoods were confirmed, then marches to the offending real estate companies were scheduled. In most cases, the marchers faced large crowds of epithet-screaming and sometimes white people throwing bricks or other items.[3] 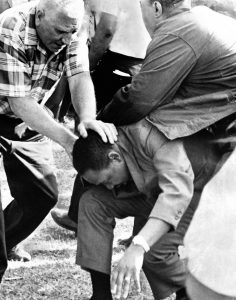 Martin Luther King Jr. tries to regain his footing after being hit by a stone during an open housing march Aug. 5, 1966, but aides prevent him from rising to protect against further attacks. 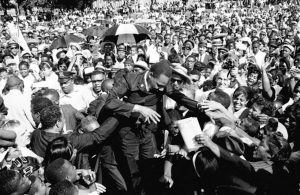 922Save
American civil rights leader Martin Luther King Jr. is helped through a massive crowd during a Chicago Freedom Movement rally in Grant Park in 1965. 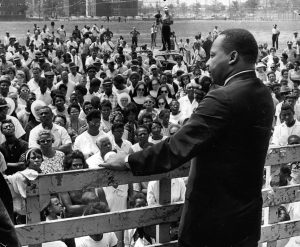 The Civil Rights Movement drastically shaped and changed the lives of black Americans during the 1960s. This movement fought for change and succeeded through tenacious and determined efforts of all involved. The Chicago Freedom Movement is one of many examples of the prominence of actions by everyday people in bringing about change in their city. By using and including Martin Luther King Jr. and his multitude of strategies of nonviolent means to change public housing in Chicago, they effectively fought for change and equality, making history alongside Dr. King during his fight in the Civil Rights Movement. This black-led collaboration with black Americans, some whites and Latinxs, significantly contributed to the racial dynamics of Chicago. This movement paved the way for black Americans living in Chicago and established legislature that has since established precedence for modern discrimination laws. The Chicago Freedom Movement had a significant impact on the city of Chicago that has since established further legal actions, legislation, and demonstrations the perseverance and determination of the broader Civil Rights Movement, especially the Chicago Freedom Movement. 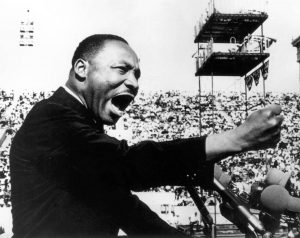 Martin Luther King Jr. speaks passionately in front of large crowd in 1964 at the Illinois Rally for Civil Rights at Soldier Field in Chicago. The rally was held to celebrate the passage of the 1964 Civil Rights Act. 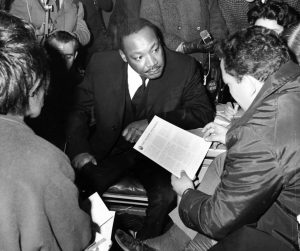