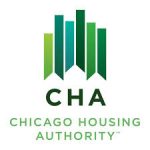 Elizabeth Wood’s pushed for the creation of the Ida B. Wells Homes, the first public housing project for African Americans. These homes were built in the predominantly black neighborhoods, but the 47 acre project pushed into some white neighborhoods as well. The Oakland neighborhood was a white neighborhood, and some of the acreage for the project was in this neighborhood. This caused a huge issue for the white families in this neighborhood. There was a federal policy at the time called the Neighborhood Composition Rule. This rule required people living in a public housing development to be the same race of the people in the area it is located in. So, since Oakland was mostly white families they started protesting against the Ida B. Wells Homes. They ended up losing, and the CHA continued on with the project. Many of the white families ended up leaving the neighborhood.

The Ida B. Wells Homes were going to consist of row-houses and high-rise apartment buildings. There were going to be roughly 800 row-houses and 860 apartments. The project was finished in 1940 and people were allowed to move in January of 1941. Elizabeth Wood’s and her team had a strict application and screening process for families that wanted to move into the Public Housing. They looked for 2 parent families who had jobs. It was very competitive, there were only 1,662 units available. 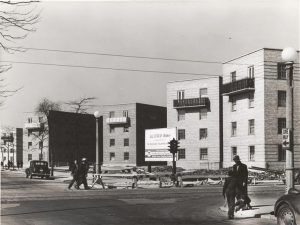 A section of the Ida B. Wells Homes in Chicago in the 1940s.

The Ida B. Wells Homes helped fast track other African American Housing Projects in Chicago. In the 1950s and 1960s public housing was growing at a fast rate. The CHA started proposing many more public housing projects. The Cabrini-Green housing project was first built in 1942, and then an extension was added in 1958. In 1962, the William Green Homes were built on an adjacent lot from Cabrini-Green. In total these two housing projects provided roughly almost 5,000 more units for African American families to move into. Most of these buildings were high-rises because there was significant over-crowding in Chicago. There was simply not enough room to build a bunch of houses. 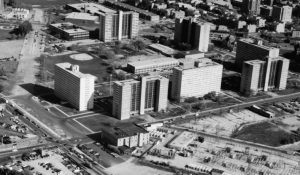 A overview look of the Cabrini-Green and William Green Public Housing in Chicago.

African American families moving into a part of the Ida. B Wells Homes.